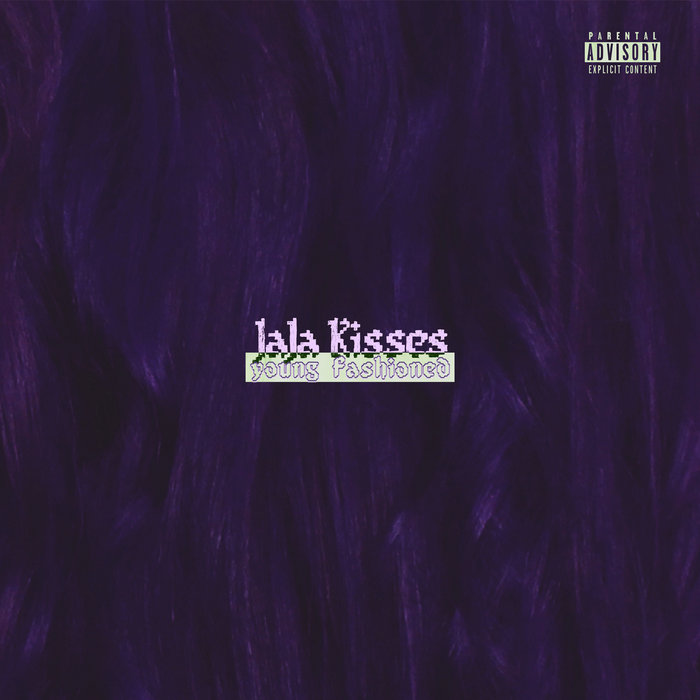 
JaJa Kisses, London's purple haired alternative R&B singer/songwriter serving psychedelic vocals over celestially alluring bass infused trap instrumentals.
Her debut EP Young Fashioned is released 12th November 2016 and will have you mesmerised with its glitchy sound, honest vibes and abstract visuals.
Born and raised in West London JaJa Kisses first started developing her sound 4 years ago, releasing heart wrenching quirky layered acapella's on SoundCloud, before releasing some music with the mysterious art collective Last Night In Paris. Since then JaJa Kisses has stepped into her own truth/Goddess. Along with long term lab partner + producer Flowzart, Kisses incorporates her love for 808's and vivid laid back soul edged vocals, threaded with a subdued intimacy in her cryptic lyrics which reveal the sensuous and sensitive content of her introspective thoughts and ideas.
Inspired by the queen of digital feelings Bjork, and other female treasures such as Brandy, Solange, Lykke Li and St Vincent she has crafter her sound, exploring new textures within the realms of alternative R&B, Indie, Psychedelic Soul.
After testing the waters with bit crushed futuristic trap song, ‘PIMMS’ which has reached over 100,000 plays on SoundCloud, Kisses has been collaborating with creatives all over the city, from featuring in music visuals for Ray Blk’s 50 50 and Rhythm Section’s release of Rockabye by Silentjay, to recently performing at Gal-Dem magazine’s takeover at the V&A Museum. Now the first lady of the postmodern nostalgic art collective Serotonin, 2017 is set to be more than an exciting year of more sereneness soundscapes, abstract visuals and tender performances from JaJa Kisses.

Track Name: Limescale
Your place
Or my place
Indecisive of the moment
But you make things how they should be
And I can't stay I'm addicted


Don't you think that we take it too far
When we're always fighting about what you want
Man I'm tired of being 'oh so special'
When you take want, ooh baby,
Take what you want to
So un-factual, about my feelings
I got feelings, can't you feel them
You been feeling all on me
But is you feeling what I been feeling

You give up a little
This whole thing feels like a set up
The further i fall when i get up
The rain still pours it won't let up
And i'm still paused on a comma
I need to be up there
I need all my friends there
I need money and success
My mum to stop working
And shit to start working
But you aint shit
Track Name: Zoning
i'll say my point
and then i'm gone
just break the rules for once boy
was your only transit to
make the right decision
i was no smarter at the time
you made my heart logic drop
am i too weak to understand
are you too weak to be a man

My racing heart is pulsing waves
and only you can feel them
you'd be a fool to just ignore
all the signs you're given
don't be ashamed its all humane
just break the rules for once boy
you know i'm all you're thinking of
don't be so quick to write me off
Track Name: Silver Knickers
Withered synergies Of you
Maybe it’s my mistake
Your eyes, seek things
The evenings are longer than everyday
Mind keep on; running all around in circles
Trying to, figure out the best for me

Can we be an exception?
I can’t help regretting you are everything I need
Surely we can supersede
Give me your sunset till the sun dies
And remedies for sore eyes
I have nothing left to be
If you say it’s you and me

I know that you’re down For me
There are no ins or outs
Are you, that deep?

The evenings are longer
And I can’t get to sleep
Mind keep on
Running all around in circles
Trying to figure out the best for me
Track Name: Girl In Need
i'm too young to let my life slip between my fingers
lose my ripest of years or let you walk away
call me stupid, drunk on disney, and science fiction
i'm a pickney of social conflict,
i still want your days

don't you want to ride?
touch and tease places in your mind
deep enough you lie
serenading every surface you light

You've never abandoned me
You never left a girl in need

don't you want to ride?
touch and tease places in your mind
deep enough you lie
serenading every surface you light

You've never abandoned me
You never left a girl in need
Track Name: PIMMS
Where does it say i'm not your chick
this is constitutional never quitting
put it on your vision board
i'll be dead before i see you bored
call me captain of your army uh
major love and general high deployed
all i ever set to do
i put shit into motion and i never lose

so if you're about it
and it's so magnetic
you can't forget me
we have those settings
take it baby
i'll be your drug get wasted
and you don't need a ticket
a list
i'm taking you places, basics

how can you say i'm not legit
i'm giving you raw replications of all of the shit that i'm in
so put it on your vision board
you know i'll be dead before i see you bored
let me be your exponential love
i'll be damned if you don't give it up
all i ever set to do
i put shit into motion and i never lose
Track Name: Allow Me
He says he don't love me no more
I'm too left and i keep changing
is that not what we're supposed to do
I watch you walk out the door
you're all mine and i aint chasing
tell me what it is you want me to do

And all the things that i'm accustomed to want
you take it away
you take it away and make it so
make it so unknown
i'll be the pipe and i'll be the viper
you want me to be
but i can't take no more
Track Name: Blizzard
Inevitable
Why are we fighting it off
So boldly
After the fall
What’s left but waiting to thaw
from crystal


Revelry buried in history
painful memories when you kiss me
(goodbye)


don't you ever get curious...

And when we're home it's extra heightened
In special ways your love ignites it
you filled it
the distant fall
and everytime i try to hide it
it enters
you filled it
you feel it
Track Name: Instincts
my instinct keep letting me down
i thought this time would be the one
i vowed i'd never be alone
but days just pass and so i roll

all those superficial things that i seem to do
all these columns and these pedestal i lean on to
tired of fucking reeling in my attitude
i'm wishing on my wishes till the rest is true
and if you're fucking riding then i'm down for you
hold my loyalties, and honesty, my gratitude
i'll try to do my best for you
smoking out the wolf who kills me in my solitude
Track Name: Ocean
I live by the ocean
and in the night
i dive into it
it helps me survive

fear is in my ocean,
if i don't lose you i might stand still
all my sweet time
am i to follow heart
might designate too far
sweet love
wish i
i had
you now
regretful
i get you

Bandcamp Daily  your guide to the world of Bandcamp